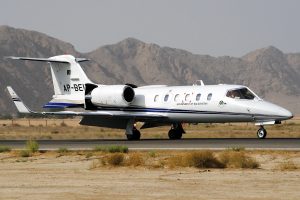 The first flight of the LJ31 took place on 11 May 1987. The Learjet 31A variant was introduced in October 1990. This version featured increased cruising speed, a digital avionics system with EFIS von AlliedSignal (today Honeywell) and an instrument panel layout change. The nose gear wheel is steered by a Steer by Wire system. The windshield could be heated electrically.

Learjet 31/31A For Sale on BusinessJet.com

Learjet 31
The Learjet Model 31 is, arguably, the ultimate realization of the original Learjet series (dating back to the model 23 of 1963). Essentially combining the fuselage and engines of the model 35/36 with the “Longhorn” wing of the 28, 29 and 50 models, results in performance which is equaled by few aircraft. Normal cruise altitudes range from 41,000 to 47,000 feet (12,500-14,900 m) and the aircraft’s maximum cruise altitude of 51,000 feet (15,500 m) is a distinction shared by only a handful of civil aircraft. Improvements over earlier models, such as “Delta-Fins” and a “Ski-Locker” increased the utility and improved the performance of the model 31. Addition of Delta-Fins at the bottom of the empennage simplified the certification process of the aircraft by eliminating the need for a “stick pusher” stall avoidance device. Increased directional stability, as a result of the Delta-Fins, was also a welcome benefit.
Learjet 31A
The Learjet 31A was announced in 1990 as a replacement after building 38 Learjet 31’s. Note, the last six 31’s, 31-033, 31-033A, 31-033B, 31-033C, 31-033D, 31-034 were equipped with Honeywell avionics systems for Singapore Airlines flight training and have a unique cockpit. The model 31A boasted numerous modifications, however the most notable changes would take place on the flight deck. Key modifications and updates to the model 31A cockpit and avionics include; a Bendix King (now Honeywell after the merger with Allied Signal) Electronic Flight Information System 50, with Universal 1M, 1B and 1C flight management system, a dual KFC 3100 two-axis autopilot and flight director with yaw damper, and dual Bendix King (Radios sold to Chelton Avionics when Allied Signal combined with Honeywell) VCS-40A com units, VN-411B Series III navigation receivers.
In the year 2000 the Learjet 31A was again revised. The starting and landing load were raised. The engines received a digital control (EICAS), the thrust reversing were now in series inserted. The air conditioning system was divided in 2 zones, cockpit and cab. The bearing area ends were provided with Winglets, in order to improve the handling in heavy weights and at high speed.

Information gathered from various internet sources. Reasonable attempts have been made to ensure accuracy and veracity of sources. However, this information should not be used for flight planning or official purposes.